Importance of Tuning a Bell

You are here: Home1 / Knowledgebase2 / Importance of Tuning a Bell 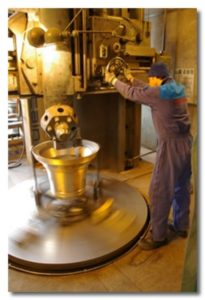 A bell is unlike any other instrument because it actually produces multiple notes, called partials. Tuning a bell is a time-consuming process that requires the bell founder to be proficient with both a simple tuning fork and high-end digital tuning equipment.

Using a lathe, metal is shaved from inside the bell at various points until the proper tuning is achieved. The bell founder must tune the five lowest partials, at a minimum, to the standard of A3=440 vibrations per second.

From the lowest partial to the highest, the notes are:

While the prime tone is the most important note of the bell, the hum tone, the minor third and the octave must be tuned with the same accuracy. Of particular interest is the minor third, which is unusual in a musical instrument.

Although the profile and tuning process works to intensify the prime while subduing the minor third, it is the minor third that gives bells their beautiful, melancholy, plaintive and compelling sounds.

Because these cookies are strictly necessary to deliver the website, refuseing them will have impact how our site functions. You always can block or delete cookies by changing your browser settings and force blocking all cookies on this website. But this will always prompt you to accept/refuse cookies when revisiting our site.